We think it may be in France, though we're still not sure. We want to be prepared for peak oil - If it doesn't happen, then we'll have a nice little bolt hole & lots of opportunity still to travel. Whereas, if we do run out of oil, then at least we'll be ready! We want to live off grid, generate our own power & not have mains water. Just live very simply... At the moment we rent an old farmhouse on the Cornish coast & we love this big old house, but it just feels right to think about moving on now. We want a small cosy place with land to grow on
We've lived in France for two periods over the past 20 years & every time we go back (usually 2 or 3 times a year), it feels like home! 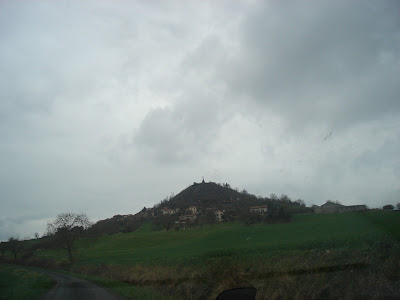 In April, we visited the Auvergne, which was very exciting for us, being amongst mountains - as that's something we miss in Cornwall! While there, we fell in love with a hillside village called Usson & could really imagine living there...  In January 2011, we are going to be spending a month in south west France, so we'll just have to wait & see what happens...
The Transition Movement has inspired us to think carefully about the way we live & how we should prepare for the future:

"We live in an oil-dependent world, and have got to this level of dependency in a very short space of time, using vast reserves of oil in the process without planning for when the supply is not so plentiful. Most of us avoid thinking about what happens when oil runs out (or becomes prohibitively expensive), but The Transition Handbook shows how the inevitable and profound changes ahead can have a positive outcome. These changes can lead to the rebirth of local communities, which will grow more of their own food, generate their own power, and build their own houses using local materials. They can also encourage the development of local currencies, to keep money in the local area. There are now over 30 Transition Towns in the UK, with more joining as the idea takes off. With little proactivity at government level, communities are taking matters into their own hands and acting locally. If your town is not a Transition Town, this upbeat guide offers you the tools for starting the process."