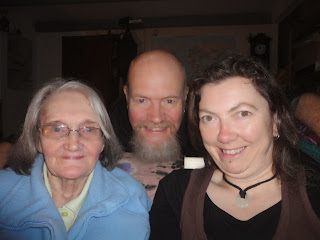 Bebe is here with us at last...

We found out recently that Bebe also suffers from Sundowners Syndrome & witnessed during our journey home yesterday just how quickly her personality changes.

We were in the car & as soon as it began getting dark, she no longer knew who we were... She had been happy & relaxed, chatting away - when suddenly, she was filled with fear & agitation!

She was angry on her arrival; the house was too cold, her room was too big, but eventually we calmed her down by distracting her with some of her favourite music & very quickly, she was dancing!

She was on top form over dinner & had us all in hysterics...
She is having a problem recognising Hugo - it's been a couple of years since she last saw him & of course, he's a young man now. Last night he was Rodney, we have no idea why... She enjoyed the laughter as much as we did!

By midnight, we were flagging & had to call time on the fun, again she became very agitated. She hadn't snoozed during the day, which surprised us & we were even more amazed that she was still going strong at 1am! We eventually persuaded her into bed with a hops & lavender cushion underneath her pillow & she has slept soundly... Phew!!!

We know we should keep Bebe occupied in the evenings, so have brought her typewriter & we'll see if she can still use it. Music is so obviously therapeutic for her & seeing her dance last night was great fun. Making sure the rooms are well-lit & warm makes her happy... Hugs & being silly seem to put her in a better mood, but leaving her for a few minutes causes her mood to slip. At the moment, it feels like we're playing tag & there always needs to be at least one of us with her, but we hope in time she'll settle down.

Luckily, we all have a great sense of humour & are certain everything will be just fine!

Jane and Chris said…
My Dad goes to singing therapy...he loves it...music has the ability to reach us when little else can.
Don't forget yourselves..lecture over.
Jane x
28 November 2013 at 16:02

The Herbalist's Cottage said…
Never heard of sundowners before. What a journey your are all on. A rewarding journey too. Much love Leanne
28 November 2013 at 16:25

Kath said…
no, nor had I heard of Sundowners, but as Leanne says, what an adventure. Please make sure you get enough rest xx
28 November 2013 at 20:03

Just Humans Being said…
Definitely... We do have a SAD light which is supposed to be really helpful, Bebe's just not keen on sitting near it! :)
28 November 2013 at 21:05

Just Humans Being said…
That's great, there's not a lot going on around here - though memory cafes are becoming a big thing... There's a monthly tea dance, but it's over 20 miles away. We're hoping the mental health team are going to come up with some ideas! We know that it's going to take a bit of time for Bebe to feel at home, but she'll be starting daycare on Monday for 3 days a week, so there'll be time for us then... :)
28 November 2013 at 21:12

Just Humans Being said…
It's hard work, but definitely rewarding - as you know... Sime finds the repetition wearing, but Bebe is easily distracted, which is good. She just has periods of insecurity, but lots of hugs & reassurance seems to work wonders! :)
28 November 2013 at 21:30

Unknown said…
Hi Bebe, so nice to see you. I won't tell you guys to take care as I can see you're both very capable. Hope everything goes well for you. Sue
28 November 2013 at 21:33

Just Humans Being said…
We hadn't heard of it until recently, I find it absolutely fascinating & love finding ways of distracting Bebe. We are just going with the flow, a bit like when the kidlets were small... Keep busy when Bebe is active & rest/sleep when she does! :) xx
28 November 2013 at 22:01

Just Humans Being said…
Thanks Sue, daycare & respite will be much needed... We shall be getting some dates pencilled in next week. :)
28 November 2013 at 22:34

Just Humans Being said…
Thanks Scarlet - we know that in order to care for others, we need to first take care of ourselves... Something we used to be hopeless at, but we are much more organised now & know our limitations! :) xx
28 November 2013 at 22:43

Susan Heather said…
Yes, Sundowners brings back memories. I was talking to a fellow carer yesterday (in a different city) and she said that time has the opposite effect on her husband and that is when he is calm but comes alive. It seems no two people with any of the dementias is the same.
29 November 2013 at 08:32

Hindustanka said…
It is really nice an dkind of you to take care of a person with sch condition. It is not easy at all! But family support is a great thing to hang on! Hope you all find ways to live happily and as you say a sense of humor helps you to overcome many difficulties, then this is what you need to involve in your routine. Take care!
1 April 2014 at 06:19