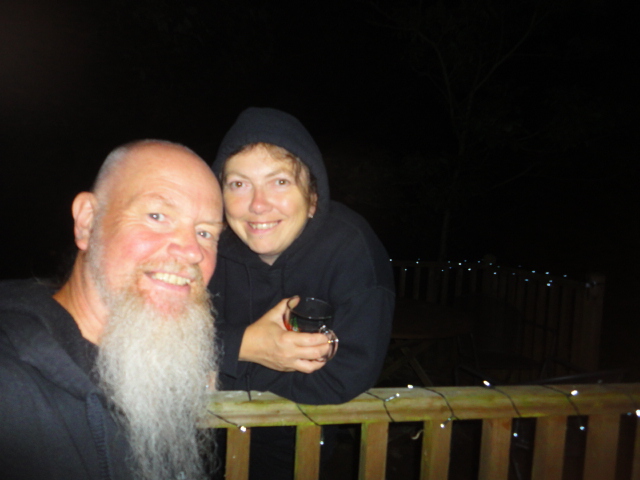 I love the summer. It's my favourite time of year. This year has been particularly bountiful with regards to long periods of uninterrupted sunshine and I have needed no encouragement whatsoever to step outside and sensibly and gradually expose my body to the rays. Over a period of many weeks I have gradually bronzed in a way that has been beyond my grasp for many years due to the whims and vagaries of the British summer. Finally, after careful immersion I have achieved a level of poise and confidence not unlike say mild smugness. Now don't get me wrong, it is by no means a deep tan, a swarthy layer of earthen masculinity but it is most definitely noticeable to those who may have whispered the words "pasty" or "wan git",
It has been not just a surprise but a crushing blow then to discover that my new found glow has not only been completely ignored, but my lovely wife (who too possesses a not unenviable tan herself has been the centre of attention because of it whilst I have been cast out from our community. A pariah if you will. Shunned...and now I skulk (for that is the only word I can employ) around the tiny lanes and quiet coves a pale (!) shadow of my former self . Oh the bitter irony.

Here is a selection of recent incidents at various places of our employ including light discussion as best as I can recall. Names have been changed, but the essence remains:

Case # 1
We arrived on a gloriously sunny morning. The trees were bursting with birdsong and my heart was full of the joys of the season, not to mention my new tan (did I mention that?)
Nancy greeted us at the gate. " You're looking well Kay, you've really caught the sun". Ignoring me, we entered the house.
Case # 2
Doreen was so happy to see us that Tuesday morning. There were the usual tasks to do and no doubt I would be walking her lovely dog in the bright sunshine.
"I can't ever seem to get a deep tan like you Kay, it suits you." Silently like an obedient dog I followed them inside.
Case # 3
"Kay darling, you look fabulous! " were the first words that Francesca said as we met her at her garden gate. Today I was sporting a new vest, a perhaps non-too subtle tip to my remarkable new look.
"Darling, can't get over it, the sun obviously agrees with you Kay"
I stepped forward, my darkened shoulders now acutely visible.
"Hi Simon" said Francesca at last noticing me. "Mop bucket's in the shed."

Case # 4
Upon arrival and the usual discourse...weather, family etc, Moira focuses upon the glowing countenance of Kay, my partner in life and marriage. It went something like this:
"Oh Kay, you DO look well! What a glorious tan. I've never seen you looking so good....Jeff, Jeff, come and adore Kay. Admire the curvature of her beautifully toned and willowy sinew etc etc etc,,," Thinking that Moira had perhaps misplaced her spectacles and was probably absentmindedly using Jeff's, I grabbed the opportunity and sidled into her immediate view, my commanding presence and rakishly bronzed grin alerting her to the sculpted and beautiful being before her.
" Kay, Kay", continued Moira now wiping a tear of joy from her eye. This was the point now, oh the anticipation! Moira had SEEN ME. I was waiting, rapt and attentive. She was going to say it.."Kay, Kay, who is this creature of bronze accompanying you today? Surely this is not Simon, he of the milk-white spindly legs, the pale and invisible shirker - he who slinks wisp-like into the dusty corners of our home?
But no...............Moira continued " Jeff dear get the kettle on. Kay, DO take a seat " I watched as the party slipped away...surely they were mistaken. I was MANIFEST!!! GOLDEN and OMNIPRESENT!!! I followed on gingerly, now taking a backseat... "Simon, can you start in the attic today? There's a build up of mildew around the sink again." As I left the room, Moira shouted "The rubber gloves are in the airing cupboard!"
I pressed my bronzed ear to the pane separating hall from kitchen, each word crushing me..."Another vegan millionaire's shortbread Kay? More Earl Grey Rooibos? What's your secret dear?

I was gutted as you can imagine by this, but then the knives were out. "What DO you see in that pale old git?" sneered Moira. On the other side of the wall I could picture the venom in her voice, her lips pursed and her eyes narrowing as she said it. I staggered back as I saw Jeff exit the kitchen only to return with a jumbo sized Vego bar,

Crushed, I stumbled into a darkened corner and now visibly wearing a brightly lit Dunces cap. It was over. I was pale again. Pale forever, Pale, git-like and invisible. It was there I stayed. I was a nob end and that is now the way of things.