February 23, 2012
I've been on the go since 6.45 this morning...
I made bread dough for 12 rolls, as it was Hugo's home ed group today & it was our turn as volunteers this week.
We have to set off early to get cheap parking for the day & for the first time since helping out at the group - it really wasn't a chore to get up & get things done!
Once at the group we were non-stop, but we were organised - lunch was ready early (we made a big pan of vegetable soup to go with my rolls). The kids were chilled & we were too...
Since getting home, we made a feast of salads, vegetables & home made soya pulp burgers.
Sime went off to band practice & I've just carried on... I've made 2 loaves, a litre of almond milk, washed all our laundry & lovingly (hahaha) draped it on the airers in the spare room.
I continue to astonish myself with the amount of stuff I've become capable of doing - is it what we're eating or what we're not eating?
Well whatever it is... It's noticeable - our friend was also doing the group today - which was great, as we've not seen him for months. Now he & his Wife, are the kind of friends that will tell us straight if they think we don't look well or don't seem ourselves.
Today, he made my day - saying he's never seen me look so well, that my skin is glowing, my eyes & hair look good & that I am positively beautiful!
(He's a herbalist, so that's a real compliment in my book)
I am so glad Sime has spurred me on to become vegan again & know that we'll never slip back to eating dairy & oil - we both feel too good!
For those of you who have emailed or asked about whether we're following a particular diet - sorry it's taken so long, but basically I would say we've been mainly inspired by Caldwell Esselstyn. I bought his book in January & read it aloud in a couple of nights - we were both hooked!
And 2 books which have been on our shelves for years:
Modern Day Macrobiotics: Transform Your Diet and Feed Your Mind Body and Spirit

We've sort of taken bits from all 3 books & done our own thing (of course)! 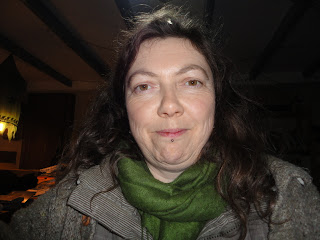 dreamer said…
Looks like your way of eating is really paying off for you :) I have been browsing some of the foodie posts on your blog and will be poaching some of your ideas for veggie meals, they look so delicious and I am trying to get the other people in my life to eat that way more often.Thanks for the inspiration.
23 February 2012 at 00:47

Karin said…
I'm glad you are feeling so well and energised, Kay. It seems like something you are eating and/or not eating is working for you.
23 February 2012 at 08:49

Just Humans Being said…
Hi Dreamer & thank you for joining us! We've been asked a few times for recipes, so will try & get around to making a recipe page sometime...

Thanks Karin - we are feeling really good!

Catherine said…
You have been a busy gal!

It's so much easier to concentrate on our health with a suportive partner isn't it? You are looking fabulous!

Just Humans Being said…
Thank you Kath, Mel & Catherine - you are very kind!