March 19, 2014
Hello!
At last, it feels like we have finally found the right balance of work, Bebe, home & play...
It's been a tiring few months of trying to do far too much, while coping with Bebe, who after the initial honeymoon period - has struggled to settle. We realise that she will never truly feel at home & instead, she talks of going home on a daily basis.
We have thought on many occasions since Bebe moved in with us that we have perhaps made a mistake bringing her here & that she would in fact be happier in a care home with people her own age. When she's with us, she often tells us that we are boring & that she is bored... She doesn't want to get involved in anything & her ability to concentrate is very poor. There are fleeting moments when she snaps out of her misery & 9 times out of 10 - it's because we put her music on.
We decided that for Bebe's wellbeing & our sanity, she needed to increase her days at daycare. First she did 3 days a week, then 4 & now she does 5! We get to spread our work out from Monday to Friday, which means we have a couple of gaps each week to do something nice during the day... Just the two of us!
Bebe thrives on routine, so weekends can be tricky & she likes our full attention. We try to get her out as much as possible, she's enjoyed the sunshine lately - but she is restless & always wants to do something else! She hardly sleeps, not even in the day... So we do try to encourage an early bed time. She wanders in the night & twice now has got dressed in the early hours & attempted to leave the house... Luckily, Sime's one step ahead & the door key is out of her reach! She does go for regular respite, but often refuses to bathe & change her clothes while there & even slept in her clothes last time! It's not easy, but we try our best & we do manage to have lots of laughs when she's in a good mood.

Anyway, on a lighter note...We finally had our family holiday with the kidlets!
We had been saving like mad for over a year, inspired by Saving For Travel. It was a struggle to find something to suit all of our work & college dates, but we got there in the end.
We chose to spend a week in Dorset & found a lovely old cart house in the middle of Wareham Forest. Our holiday started on Valentine's night & as the date got nearer, we felt relieved that we weren't going too far. We travelled through terrible stormy weather & were greeted with flooded roads, fallen trees & lots of diversions.
To cut a long story short, we had a thoroughly splendid time - although the storms took down electric cables to the house... We were without power for 3 days, but it just made it more of an adventure!
At the end of the week, we all caught an overnight ferry to St Malo in Brittany & had a fabulous day strolling around the old city in the warm sunshine. 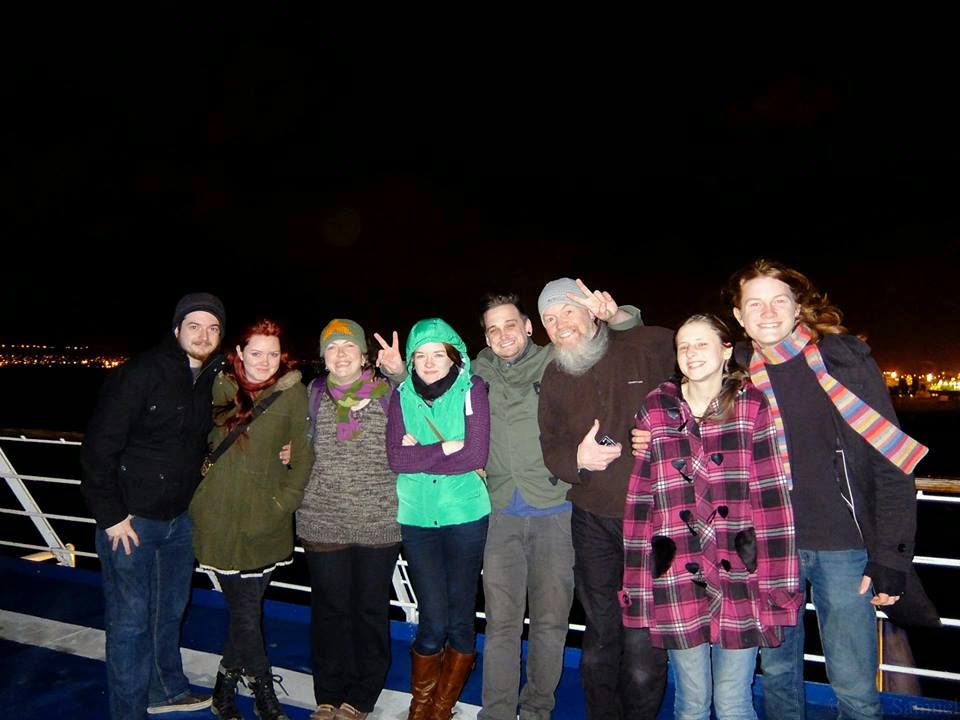 There were 7 of us on our last family holiday, which was 6 years ago & now there are 8!
Hugo's girlfriend, Jess joined the full clan for the first time & like Ryan & Asa, is very much part of the family!

Hope you are all well.

Rambler said…
How wonderful to hear from you; I guessed it might be a full time job coping with Bebe as well as all the other things you need to do. I'm so glad you are able to get her into day care for 5 days a week - maybe a forerunner for her going to a care home full time? It isn't easy when the memory goes and diplomacy and tact go out of the door.
The holiday sounds great. I remember a time a few years ago when I just needed to get away from everything and in the middle of a severe winter I took my tent and my dog to a camp site in Wareham Forest. Dog had a thick fur coat and I was cosy and warm with my extra clothing and covers. I slept with the water bottle in my bed so that I could make tea in the mornings before setting out through the snow, following tracks in the forest and seeing deer, rabbits, foxes, badgers, stoats and so much more. Time wasn't important; we rose at dawn and went to bed as soon as it got dark - no wonder it re-charged my batteries that week. We walked the Wareham Walls and enjoyed empty beaches, ate well from my little cooker and felt really refreshed. The owners of 2 caravans that came for a couple of nights thought I was mad, but eventually accepted that we were absolutely fine, thank you. I hope you felt as good after your Wareham Forest sojourn.
20 March 2014 at 13:15

dreamer said…
Lovely to see you posting again and I'm glad that you seem to have got some balance back in your life.
Your break away sounds like good fun despite the weather and the power outages. The photo of you all together is great - you all look really happy - cold - but happy x
25 March 2014 at 16:10