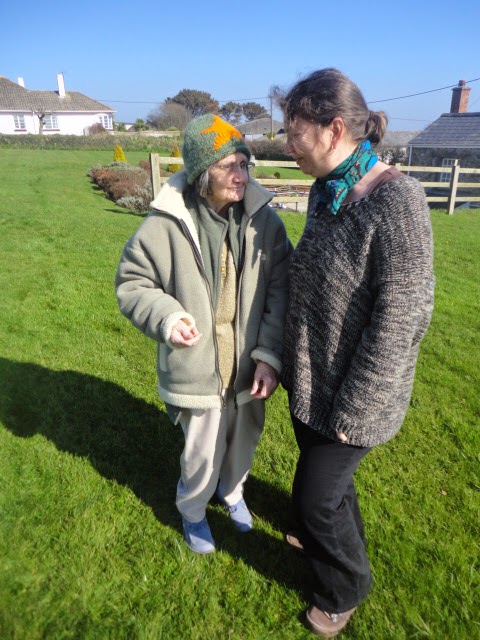 Time is flying by... We can't believe that it's nearly 6 months since we left to pick up Bebe & she is for the main part, enjoying life. We do have the odd blip when she is quite low & agitated, when nothing we say makes a difference, but for the most part - she is fine.
We have to remember that she can drift in & out of lucidity, one minute she seems so rational & on the ball, then the next she can be lost, insecure & child-like. We have discovered more & more  just how much Bebe can do & are realising that just like others with dementia, she is very good at pretending that she is still capable of doing certain things. It's not easy for her to accept help with her personal hygiene & she's at times desperately trying to cling on to her independence.
We encourage her to do as much as possible for herself, but it is very sad to see just how much she has forgotten & equally it can be exciting when out of the blue, Bebe will randomly remember something!

It has to be said that life hasn't always been great with Bebe, she & Sime have had a difficult relationship - probably due to Bebe suffering from an undiagnosed mental illness for many years... Sime continues to go through periods of dwelling on the past; the mental & physical cruelty Bebe inflicted on him has really taken it's toll. The thing that torments him the most is the way she planned it all out & the enjoyment she got from it. When Sime & I got together, Bebe's attention shifted to me - she absolutely hated me & she did all she could to tear us apart, but amazingly, we got through it.
Had someone told us back then that in the future we'd invite her to move in with us & happily care for her - we would have thought they were barmy!

When Sal & Rose were born, Bebe completely changed & became a doting grandmother... Although she continued her game of spitefulness towards me, she was great with the girls & we actually enjoyed a few years of mainly good times. By the time Hugo came along, Bebe was probably beginning to suffer with dementia or at least, her mental health was deteriorating. She was still haunted by some past trauma, which she hadn't received any help with. She was also drinking heavily & her OCDs were getting worse (she had issues with cleanliness, as well as a need to constantly check locks & switches). We were so busy with our own lives, that we didn't stop to think about why Bebe was going through all this & infact, it's only been in recent years that we've realised the way her past has engulfed her. Most of Bebe's problems have slipped away as the dementia has gotten worse & in the early days it was so nice to see her not dwell on things too much & even relax a little...

As time has gone on & the more we've thought about Bebe's mental health & behaviour, we have learnt to forgive her for the hell she has put us through. Having some understanding of mental illness has made us see her in a very different light.
Since Bebe has moved in with us, we have had many frank discussions about the past & this seems to have worked wonders on both her & Sime.

Caring for a dependent relative really does take it out of you & we recognise that after a couple of weeks of full on care, as well as full-time work, we feel ourselves starting to crack... The exhaustion takes over & not only do we struggle to function properly, but Bebe repeating herself for the 6th time in half an hour somehow loses it's hilarity. The fact that her wardrobe has been rearranged again overnight & she's lost yet another sock just starts to eat away at us. Her refusal to wash or bathe gets us down & the way she keeps questioning her tablets every morning with such suspicion.
As soon as we start to feel irritated, we know we need a break & it's so easy to see how difficult it must be for a carer on their own. We both know we couldn't do this alone, experiencing the poor level of local government support we can see how terrible some situations must be. At least Bebe has a little money in the bank to afford regular respite, but her higher rate Attendance Allowance doesn't even cover her daycare, so she will probably run out of money - even when her flat is sold.

So here we are, having time out from Bebe & all we do is think about her... She has gone into respite for the weekend & we had loose plans to get out & make the most of our time, but instead we have slept in & not long had breakfast.
When she returns on Monday, we'll all be happy to see each other & we'll be able to laugh again at the weirdness that is dementia. Of course, it's not really a laughing matter - but that's the way we deal with it, even Bebe can laugh about the things she does in her more rational moments. She has to live with this condition - what's the point in us all dwelling on it? We want to make her time as enjoyable as possible, but tiredness is the thing that gets the better of us. That's why respite is important; regular injections of rest... Even a day in bed or lounging around is a novelty these days, but it feels good to go with the flow & not have anything planned.