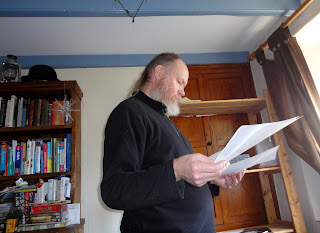 Serious times are upon us...
This photo was taken last week.
Sime was clearing up out-of-date paperwork.
He puts it in piles on the floor for recycling & burning, but then he gets fed-up & says he'll finish it the next day.
Which is fine - usually...
This time he slipped on the paper walking through the dining room in the dark.
He stumbled & ended up bashing his side on a chair...
He has a large bruise which is fading now with arnica, but we did end up visiting firstly, the local minor injuries dept (which is actually over 12 miles away).
What a terrible place it is, yes it's free - but incredibly degrading. The waiting room was full & you have to ring a bell to get the receptionist's attention. When she arrives at the hatch, she speaks very loudly & discusses your problem for all to hear.
Then you are left to just sit & wait, surrounded by whole families & lots of small children running around.
We decided to sit outside the room in the hallway & another woman came to chat to us, she was supporting her Husband & had been waiting for over 2 hours.
Doing our calculations, we worked out we would have to wait probably at least 3 hours before Sime would be seen, so in his wisdom - Sime cancelled his appointment & we left.
He just didn't have the patience or the ability to sit for that length of time...
Anyway, that same night he was in agony & the painkillers were not working, so we went off to Truro A&E.
We arrived at 10pm & were pleasantly surprised to see just a handful of others waiting.
He was promptly seen by a nurse & given some strong painkillers, which eventually eased the pain & enabled him to sit down, but then we had another 2 hours to wait before he saw a doctor.
We were taken into a cubicle, where a nurse came & asked all the same questions that the previous nurse had done... She also had a look & feel around Sime's bruise & asked a couple more questions: Who's this with you? Do you have a job? I think she seriously thought that I was his carer from a local homeless hostel - he was just so scruffy & unkempt....
And when she suggested that Sime may have damaged his liver & will need a scan - we were both shocked!
She left us while she went to find a doctor & for a second or two, I felt panicked - what would this mean??? Will he have to stay in? Will he be ok? How will I cope without him?
Before I burst into tears, the12 year old doctor came in...
She had a good rummage, though not before she'd put her gloves on & it was decided that there was probably just some muscle damage & no need for an x-ray.
Was this because of his appearance or did she really think that that was all it was?
He was prescribed strong painkillers & we finally arrived back home at 2am.
As he got up this morning & was still suffering so much, he thought it would be a good idea to see one of our GPs & she thinks he has possibly broken a rib.
It will be about 6 weeks before he's back to normal, so in the meantime - we've been banned from saying anything funny... 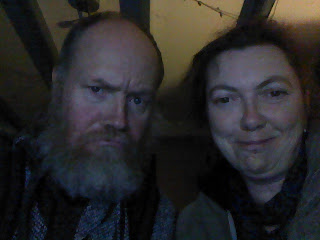 which is harder than you think...
Bye for now,
Kay & Sime xx
NHS

Sorry to hear you had such a rotten time, both of you. Fingers crossed it is nothing more serious than some rainbow bruising. Get well soon Sime!
7 November 2011 at 20:42

Just Humans Being said…
Thanks Kath.

And whoops - we've had emails about my comments on Sime looking like a homeless person... Sorry, I am not suggesting that all homeless people are scruffy!

Sime's just a dirty musician... A bit like Radiohead!

Catherine said…
Oh no! This is not good at all! But laughter makes the best medicine so perhaps just a light chuckle now and then would be OK.... ;)

Best wishes for Sime to get feeling better soon! Don't over do it!

Anonymous said…
I am a little behind in my blog reading, so, HOLY CRAP!! I am happy to hear that it isn't the liver. If it makes you feel better I won't laugh at all until Sime feels better.
Do you feel better yet?
9 November 2011 at 03:44

Sol said…
hi there, found you by another blog...

All nurses and Drs should wear gloves it is more for your protection that they may have touched someone else.

I fell badly 2 years ago and you can still see my bruises.

Just Humans Being said…
Thank you all for your lovely comments. I'm feeling much better & can almost laugh uncontrollably!

Kay's been force feeding me various concoctions of arnica, calendula, echinacea & nettles, the bruise has almost gone & have even managed to work today!