on February 25, 2015
We have been busy sorting through all the stuff on our laptop & have found these 2 videos of Bebe taken in November...

A lot of what she's saying in this first video is make believe, but it just shows how she can somehow be totally convincing & is quite a storyteller!

This is just a few days later, but you can see how low she would get & how irritated we were feeling too.

These are just small examples of what life was like towards the end of her time with us.
Her manic high moments would sometimes go on for hours, talking & singing non-stop. Eight hours was the longest stint, which was on her last night here. As her behaviour escalated, so did her voice - she became louder, full of aggression & threats, in the end we called for a doctor. She finally quietened down at around 1:00am with sedation, but had been on the go since before 5:00pm.
During her restless periods she was like a tired out toddler getting her second wind. Sometimes she would run from room to room, pile all the cushions up on the sofa & try to climb on top, demand food & drinks in the early hours, desperately try to find the front door key to get out in the night & even attempted to phone the police to tell them we'd kidnapped her. In Bebe's last few days here she managed to climb over the barrier (which was like a stair gate) at the top of the stairs during the night & finally she completely smashed it to pieces.

As time was going on, we were getting more & more exhausted, falling into deep sleeps between being disturbed in the night - leaving Bebe to get up to all sorts. Fear was (& still is) a big problem for her, most nights she was convinced she would be attacked & didn't want to be left alone. Fear in people with dementia is common, a lack of understanding causes them to panic & eventually the adrenalin kicks in. Their 'fight or flight' instinct takes over & this is what would happen to Bebe most nights - often she armed herself with various weapons (coat hangers, broom, walking stick), she would either barricade her bedroom door or attempt to break out of the house! She can go for days without any sleep at all, but being in the care home now means there are night staff to sit up with -something we couldn't do...

Dementia is much more than memory loss, Bebe's behaviour is certainly complex & with nearly 36 million people worldwide now suffering from the disease - it really does make us wonder how on earth others are coping, especially if they are not receiving the support we had.

We have gone through periods over the last few months of regret in taking Bebe on. We thought it had been pointless - she wasn't happy most of the time, so why had we bothered? Were we foolish in believing we'd have an impact on her life? Then when we visited her yesterday, we were pleasantly surprised to hear her mention that she remembered living with us! We truly thought she'd have no recollection, but she does... 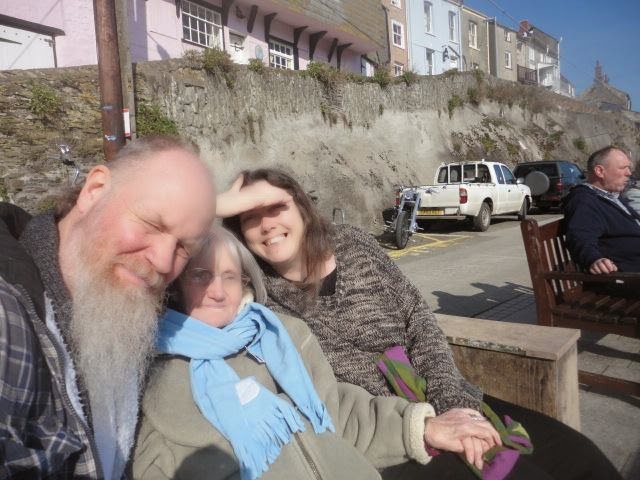 Perhaps we did make a little difference in the end!