on September 03, 2011
How did we get here?
24 years of marriage today!
We had no intention of getting married...
So there was no engagement & Sime's proposal came out of the blue - on a pub car park, after a day at Alton Towers & a bit of argument!
We married in secret...
We decided just to make the day our own.
No grand ceremony, no flashy new clothes & just a few quid spent!
All we bought was a special license because we were marrying within two weeks & our rings.
We just told two friends who came along to be our witnesses.
And we had the most perfect time.
Our Mums were not happy when we returned from our honeymoon, but we didn't care...
We had already decided to have a party a couple of weeks after, Sime's band performed & everyone seemed to enjoy themselves.
We thought it was a good idea to get really drunk before the party to help us get through the constant introductions, so just ended up giggling all night!
Neither of us wanted to marry in front of lots of people & we're so glad we did it our way.
Yes, we were selfish & lots of folks said it wouldn't last, but here we are... 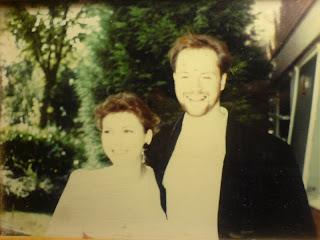 Pattypan said…
Happy Anniversary and congratulations. Elopement - good on you - how romantic. Hope you are both keeping okay and hope its a lovely day

Catherine said…
How sweet! I totally would have eloped but Wayne said if we eloped, none of his relatives would ever speak to us again. I really didn't see the problem with that... ha!! So we had a wedding (about 120 people ~ mostly his friends and relatives) and still no one comes to visit us. I guess it turned out all right... ;)

Hope you two had a wonderful day celebrating your 24 years!

Karin said…
Congratulations. I hope you had a great day. It was our anniversary on Thursday but we celebrated yesterday, too.
4 September 2011 at 17:09

Kath said…
Aw don't you look pretty Kay!
Happy anniversary and many more to come!
We eloped to Gretna green between xmas and the new year and have never regretted it. Like you say, it was about us and not all the hoo-hah that usually goes with weddings.
4 September 2011 at 19:33

just Gai said…
Happy anniversary. 24 years is quite an achievement. You should be proud of yourselves. Here's to the rest!
4 September 2011 at 20:19

Happy anniversary too Karin - how many years for you?

Kath - that's great! We visited Gretna when we were first together, just for a nose though...