on September 09, 2011
I hate uniforms, always have done.
When I was at high school, I did all I could to put my own stamp on it - especially in the last two years & was always getting into trouble for wearing my red socks or a t-shirt instead of the school blouse & my extra large men's chunky sweaters, instead of the grey v-neck...
A year before moving to Cornwall, I changed my job & worked for a housing association as a community visitor - which unfortunately, had a hideous navy & grey uniform. I thought it looked great with my red baseball boots & it actually thrilled the old folks I visited!
When I started work down here for Social Services, I was back to wearing my own rags. Then one day I had a phone call from the boss of my department, she said she had seen me out & about with a client & she was horrified at my clothes! She said that I should be wearing slacks & a smart top & not the "left-wing, socialist, hippy outfit" she saw me in & that she had been informed by my line manager that I always dressed like that.
I couldn't believe what I was hearing...
I explained to her that my job involved supporting people who mostly lived in quite terrible conditions, people who had mental health problems & there was no way I was going to wear anything smart, besides if I turned up to my clients' homes looking like someone high & mighty they wouldn't have given me the time of day, they wouldn't allow me to befriend them, to get them out of the house, to just sit on the floor for a chat or help them to help themselves - it wouldn't have worked... And I wouldn't feel comfortable wearing anything smart - it isn't me. Besides, when some of those clients were feeling low - they often said my patchwork trousers cheered them up!
Anyway, I won the argument, I visited my union rep & was told she had no right to tell me how to dress!
The other day, there was a comment on Facebook about how sad it is to see all these little kiddies with their school uniforms on & I agree.
We're made to believe that the reason for uniforms in schools is to make the kids feel part of a team & equal, so kids from different backgrounds can be the same without standing out...
Rubbish... It doesn't make a difference, all it does is makes the kids hate school even more.
Saying that, we wanted to home educate our kids from the start, but Sal really wanted to go to school, have the uniform & she loved wearing it, well until she got to high school - where she only lasted six months (Thank goodness). The school was awful & when we met with her teachers at parent's evening, hardly any of them knew her name or could tell us how she was getting on. Poor Sal was bored too - the school had a policy to keep each class at the same speed, so kids who got through their work quickly had to wait for everyone to catch up before moving on... Sal was one of these kids.
I am so glad that Rose hasn't had to go through all that, as she finished school at 9 & Hugo has never been to school, in fact he isn't even registered with our local authority. Though things may change. Apparently, a child under 16 who takes an exam has to be registered to receive the qualification. Hugo should have a GCSE in Circus Performance & at the moment we are in discussions about whether being registered is a good idea, as he can't officially have the award.
Registering isn't usually a bad thing & we haven't got anything to hide, but it's just the principle. We've come this far without any government help & education officer visits. Hugo is an intelligent young chap & he has the freedom that most kids don't have, but he is sensible. As with the girls too, we trust him & we have a lot of respect, all 3 of them never cease to amaze us & as long as they are happy - that's what counts for us.
To me, there is a big difference between school & home educated kids.
School children are forced to do things they don't always want to do, they are sometimes taught subjects they have no interest in, they get bored & tired & these days not all kids come out of school with the ability to read & write. We have been told before that home educated kids are wrapped up in cotton wool, that life is too easy for them & they can't learn to look after themselves in difficult situations.
What is true is that the kids get more choice, they socialise in smaller groups than most schools & when they do leave home - they are ready to face the world, probably at a younger age than if they'd gone to school. Both of our girls chose to attend college from the age of 17, they were ready to settle down to complete their courses & were eager to achieve. Their fellow students were only interested in messing about, they were suddenly thrust into this mature world called college & they struggled to get the hang of this new relaxed life.
I think we have given our kids the best start they could possibly have, not only have they been home educated, but they have been taught by interesting people from all walks of life, not just a trained teacher who has to get certain grades. We could never teach them everything, but we've given them opportunities to learn & they in turn have taught us so much.
Why stick your kid in a uniform, inside four dreary walls - when there's a whole world out there that is better than any classroom. 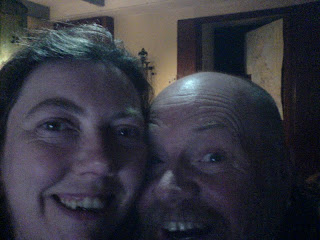 Anonymous said…
I am so happy that my daughter has decided to finish her last year of high school at home (except one class). I have been begging my son to return home, but he says no way.
10 September 2011 at 02:28

Kath said…
Oh Kay, the more I get to know you, the more I realise we're very alike and although I did not home educate (because of my sons dislexia), I agree with your principals totally.
10 September 2011 at 14:39

Karin said…
Our state education system isn't perfect, but I'm not sure home education would work for everyone. I tried teaching my son to write a little before he started school, but he wouldn't let me tell him how to hold the pencil. Once he started school, he deemed whatever the teacher had said to be 'gospel'.
12 September 2011 at 21:33

Just Humans Being said…
Kath & Karin - Thanks for your comments.

I think boys are mostly slower to progress too. Hugo had no interest in reading & writing until he was 8. It took a lot for us not to push him, but with support from others - we were able to let him go with the flow...

He's now reading books like Richard Dawkins' "The God Delusion" & has naturally developed an interest in science & the universe.
13 September 2011 at 01:24