September 13, 2012
We knew while we were away that we wouldn't come across any veggie eateries, so we just took pot luck & hoped for the best... 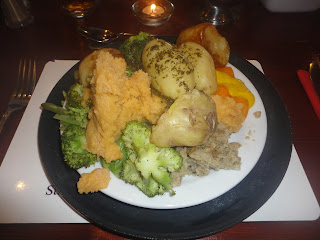 We love carvery vegetables & were pleasantly surprised when we discovered that they were serving exactly what we both fancied at The Old Inn at St Breward.
The chef was really helpful & told us what we could have & also gave us a big bowl of vegan spuds (the main ones were cooked in beef fat) & a jug of freshly made vegan gravy. The stuffing was vegan too!
The pub always has at least 4 veggie dishes throughout the week & would be willing to put a vegan meal together. 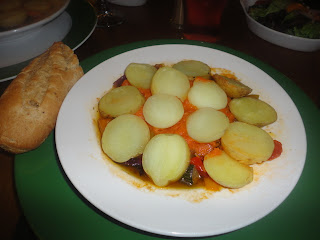 We arrived at The Halfway House fairly late & found nothing on the menu, but after discussions with the staff - they managed to make a vegetable bake which they topped with sliced boiled spuds.
It was ok & we were hungry...
The best meal while we were away, was fortunately on our anniversary.
We called at The Rising Sun after our walk & swim, when asked if we'd like to order food by the barman - the whole pub stopped & stared at the word 'vegan'... We felt like we were starring in 'American Werewolf In London'.
Amazingly, the barman said he'd ask the chef if he could do us something & soon came back saying he would! 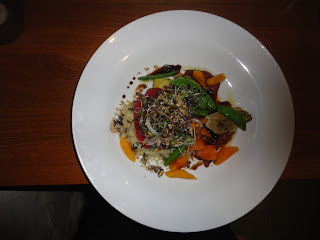 It was delicious & rounded off our day perfectly... 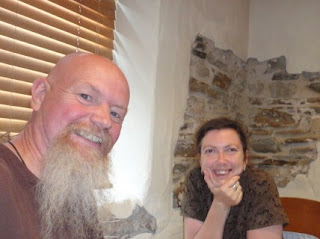 We had a wonderful day, one that we'll always remember!
It's the first time in Cornwall that pubs have pushed the boat out & made the effort to provide us with a vegan meal - things are looking up!
Kay & Sime
xx

Anonymous said…
That's awesome that they could accommodate you at several places! The meals look pretty good, too. It's improved greatly in our area these last several years, which gives us hope that someday veganism will be the norm. :)
14 September 2012 at 00:20

Catherine said…
You two are looking so fantastic ~ your eating healthy is showing itself. I hope you had a wonderful anniversary and I wish you many many more years of wedded bliss!
xo Catherine
14 September 2012 at 02:48

Susan Heather said…
It is always good when people go out of their way to help.

I was in "the Fat Camel cafe" here in Whangarei and wanted a gluten free meal with no raw onion. They were so helpful and the meal was so delicious I have since returned.
14 September 2012 at 07:03

Kath said…
That's great that people are waking up to veganism! That big plate of veg made my mouth water :-P

That's a lovely photo of you both, you look very well and relaxed and a great advert for Plant eating!
14 September 2012 at 11:10

Scarlet said…
It's great that the staff were willing to cook something for you - much better than when you were out walking a couple of weeks ago and couldn't even get salad and bread! The plate of veg looks 'Christmas dinner' like , and pretty much as I envisage ours will look this year. J and I are planning on going to Hebden Bridge on Sunday and we've found a cafe that serves vegan food , so we may well treat ourselves to lunch out. That's a fab photo of you - I hope J and I will look that good someday soon!
14 September 2012 at 14:00

just Gai said…
Those platefuls of food look delicious. Well done to the chefs who were willing to feed you. You should consider writing a guide for fellow vegan travelers in Cornwall.
14 September 2012 at 23:33

Just Humans Being said…
Thanks Scarlet - we were really surprised by the chefs being so helpful!

Just Humans Being said…
Thanks Gai - we have thought frequently about writing a vegan travel guide. Maybe we should just get on with it!
17 September 2012 at 22:08