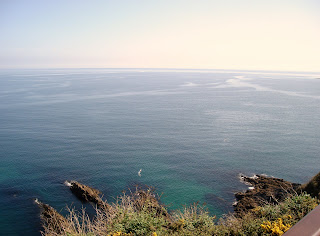 We're getting into the swing of things again - working hard & getting organised.
It's such a great feeling & I love it when it all goes like clockwork!
Today, we were up & out early, 4 properties to prepare for this weekend's arrivals...
Last night's business meeting* paid off & so everything was completed with time to spare!
We even had time to visit our favourite cafe in Mevagissey for a cuppa, which has just re-opened after the floods in November & enjoyed soaking up the sun for a short while in the grounds of one house - so it's been a good day!
*In other words - sitting at our dining table, drinking herbal tea, eating home-made chocolate brownies, me making suggestions for our day ahead & taking notes, while Sime just agrees to everything & doodles. 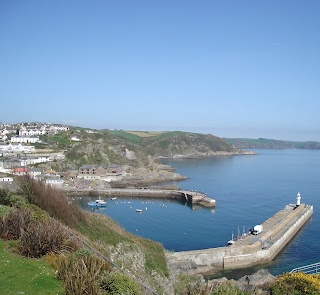 The weather is wonderful, blue skies & so warm, though I suppose it's scary & not normal for this time of year - but still very welcome. We seem to have bypassed spring & gone straight into Summer, which probably means it will all be over by June & then will get cold & wet again...
We're working again in the morning, then tomorrow night - Sime has his first gig with The Dolphins Fly. He's learnt 22 original songs in 5 rehearsals & played along with their CDs whenever he's had a chance, so he's ready (though he doesn't think so). 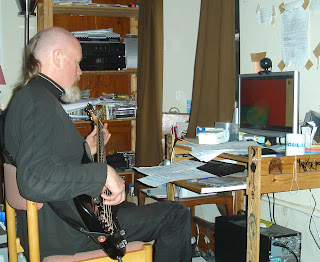 Hugo & I are going along tomorrow too & I'm really looking forward to it, as for the first time in nearly 25 years - I actually like the music he'll be playing!
The gig is near to where we used to live in North Cornwall, so we're going early, taking a picnic & will be checking out our old haunts - hopefully, we'll have nice weather again... 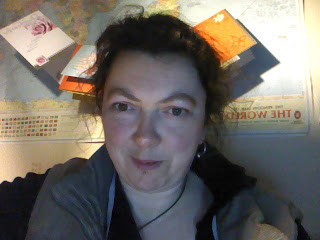 Kath said…
Hello Kay, I thought I'd come over and meet you all properly. How wonderful to live on the Cornish coast. We spent a lot of time down there over the years, St Ives, Launceston, Mawgan Porth, Tintagel and Liskeard, so we know what a varied and beautiful place it is. Enjoy the gig, it sounds fab!
9 April 2011 at 14:15

Just Humans Being said…
Hi Kath - We love Cornwall too, living on the coast for us is great out of season. Our beach gets too busy in the Summer, but is just perfect in the Winter...

Pattypan, the weather's been great here - in fact yesterday we got a bit burnt in the garden!

The gig was great, but our internet won't let us upload photos at the moment, but will post them soon...