April 21, 2011
This morning we didn't have to rush off to work - as some of our private cleans are afternoon jobs.
Although we have got a couple of holiday lets to prepare for next week, we just wanted a few hours at home to catch up with laundry, bread making, etc - so it's been good, but it will mean we'll be extra busy next week!
It's always nice to start the day without the alarm, but we were surprised to wake quite early - though probably due to the warmth & bright sunlight shining through our window...
This weather is unbelievable & the area is packed with holiday makers, which on these little lanes - causes lots of hold-ups, but it is nice for these folks to have good weather - very often school holidays are cold & wet!
Last night we watched the film 'The Hurt Locker' which is about a bomb disposal team in Iraq & Sime, being the concerned chap that he is - figured that he should contact the Ministry of Defence to tell them that he'd worked out a better, safer way of disposing/containing bombs... So on waking this morning, I had to listen to his idea & the more he talked, the more he became excited about his plan. He then imagines how many lives he'll save & how he'll become an international peace envoy... It's all very nice, but I've endured this kind of rubbish for far too long, so the only way to shut him up is to repeat a word that will register after a while & today's was "hungry", I've had to do this for years - every time he takes a breath, I say "hungry" & eventually he stops & laughs... Phew!
This little game also works with the words "frozen" & "tired", but the trouble is - he then takes it a step further & demands that I (or the kids in the past) show him just how tired, frozen or hungry we are... It used to be a good way of cheering the kids up, especially when Sal got hungry (Ryan, take note - it might diffuse those fraught situations!) - he'd be very sympathetic & then ask for her to show us all how hungry she was & of course we would all end up laughing, because it's such a ridiculous thing to act out... As is being tired or frozen. Now the kids are older, he sometimes will ask Hugo, but he's not that keen on playing any more, so we (being the idiots that we are) just play on our own. This morning being no exception, we lay in bed trying to out do each other in the hunger department & the unwritten rule is that the one who cracks up first - makes breakfast. I managed to keep straight faced the longest, so Sime made the porridge!
Talking of silly games, I don't know if it's normal to do what we do - we've done it for so long, but another thing we amuse ourselves with is creeping up on each other! The boys are really good at it, though I've had my moments... When Sime worked early mornings, he would manage to creep into the house & would hide somewhere bizarre - like under the dining table & wait for the right moment to leap out or grab my leg, but I got my own back quite frequently! Yesterday, we were cleaning a three storey house - just the 2 of us. Sime was on the top floor, while I was in the kitchen on the ground floor & somehow he managed to creep up right behind me & just stand there in a sinister fashion, so when I turned - I had such a shock! I shouted out & leapt a mile, but of course it has given Sime much merriment & it's a fright he'll remember for a long time... But, he knows I'll get him back big style - might not be today, might not be tomorrow, but I'll get him back! 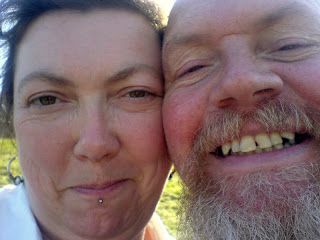 Elizabeth Rhiannon said…
OH! I can't handle having someone sneak up on me and give me a scare...I feel like I'll have a heart attack one day! haha! And as for what's 'normal'...as one person once told me, "Normal is a setting on your washing machine". Too true...
23 April 2011 at 04:31

Karin said…
I'm glad you haven't been overworking and/or missing out on food and that the lovely warm weather didn't pass you by.

I guess there is no harm in dreaming that we can make the world a safer place, so long as we can tell the difference between our fantasies and realities. Then again what if Simon has thought of a way of making bombs safer?

I'm not sure I'd be too pleased if someone crept up on me like that. Thankfully my family aren't in the habit of doing that. I hope you have fun getting your own back, though, Kay.
26 April 2011 at 14:11

Just Humans Being said…
Thanks Mel, Elizabeth & Karin for the comments - I've not been able to write this until now because of our continuing internet problems, should all be sorted very soon...

I did get Sime back - twice! It was very satisfying...