The Day Our Lives Changed

on May 11, 2011
It's actually 40 years ago since Sime & I first met in Wales & spent a few hours playing together.
We didn't see each other again for another 15 years... May 9th 1986.
So yesterday was the 25th anniversary of us being together!
We still don't feel old enough to have children, let alone be a year away from our Silver Wedding Anniversary!
The night we met was a sort of get-together with both our families - Sime's parents were friends with my grandparents, so they had known each other a long time.
We chatted politely & I have to say that I was very impressed with the fact that he was in a band & that they had just recorded their first single & some months later - Sime admitted to being impressed that I was dressed all in black (His favourite colour)!
Those first few months we were together are still very vivid, not only because we were falling in love & it was all very exciting, but because Sime's Mum, Bebe - was not happy about our relationship, in fact she did everything she could to split us up. I just wasn't good enough...
We amazingly, managed to stick together & on the day this photo was taken - we declared our love for each other & vowed to be together forever...We were quite drunk at the time, but it was still very sweet! 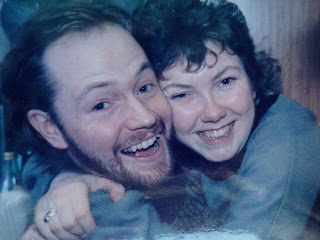 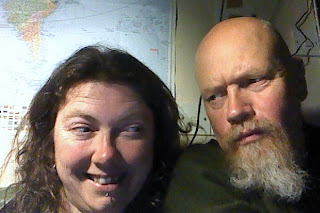 Just Humans Being said…
Thanks Mel & Kath, It's taken about 20 years for Bebe to accept me & now she has dementia - I'm the bees knees!

Karin said…
Congratulations on 25 years together and on getting your new internet connection.

My mother-in-law was the same, Kay and now she has dementia she's always pleased to see me because I'm a familiar face.

I think it may have been because she didn't feel secure in her sons' affections. She was the same with her other daughter-in-law, too.