The Taste Of Things To Come

on May 09, 2011
It's no surprise that Sime & I had to have a proper lie-in this morning...
We've worked really hard over the last few days, especially yesterday - getting jobs done & houses ready for guests.

To top it all - we were invited to an album launch by a local band last night, so we went along. The band, in my opinion were pretty awful... They were competent musicians, but had concentrated on spending money on equipment & image - instead of on their music. The Dolphins will be playing the same venue next month & I know that the night will have much more of a buzz about it, so really looking forward to it!

Our eating habits have gone up the creek again this weekend - we were eating pasta at midnight last night, as we'd skipped a meal & were then hungry when we got home. Today, we ended up having breakfast at 2pm & nothing else until 10pm tonight! Tomorrow, we have a big clean to do, so no doubt - we'll go without breakfast, but have a good lunch instead. At least when we do eat, it tends to be good food. I always find time to make a week's supply of bread & we have an organic veg box delivered every week. So we're fine!

We've had a day off today - which is nice, so we sat & watched a film this afternoon, something we haven't done for a while & it was really good too!
Flame & Citron, based on the true story of 2 Danish resistance guys from WWII. 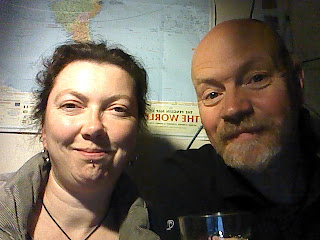 Karin said…
Sounds like you are very busy at this time of year, but I guess it's knowing you don't have a daily grind 6 out of 7 days for the whole year that makes it worth your while.

Just Humans Being said…
Thank you guys - we try our best to eat well & rest, but I am looking forward to life being a bit quieter... We definitely could do with some days at home!