May 05, 2011
We've had lots of messages from folks saying what nutters we are for driving through the waves the other day, though I don't know why I'm included - I didn't want to do it!
Saying that - we are used to driving through it, though neither of us have ever seen the sea that high before!
Some years ago, we had a French student staying with us, Sime thought he would like to experience high tide down there, so he took him & Hugo .
They decided to take a chance, got out of the car, went up to the water's edge & then realised that a massive wave was about to hit them, they ran & jumped behind the wall of the end house.
Needless to say - the wave shot over the wall & the three of them ended up drenched!
We've also heard stories of cars being swept away in that very cove - which is why the bollards are there...
Anyway, Sime wouldn't have taken a chance if he thought we were in danger...
We really have to get to bed now.
We have an early start tomorrow... Followed by a late night!
We have 3 properties to prepare & then all the family are off to Sime's gig in Falmouth, so we'll get to see Sal & Ryan - which will be lovely! 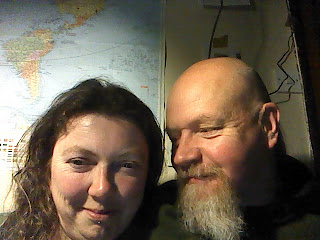 Karin said…
You clearly don't like life to be dull, but that doesn't mean that you are mad necessarily. I hope the gig goes well tonight.
6 May 2011 at 11:45

Just Humans Being said…
Thank you both - It's nice to be on the other side of all that work & now we're off to enjoy ourselves!

Pattypan said…
I like dodging waves. One of the funniest moments though was with my father. On holiday in Wales at Talybont near Barmouth. I had been in the sea for quite some time and my Dad came out to meet me - he opened his mouth to speak to me and got sloshed in the mouth full on by a wave turning. He promptly lost his false teeth which were washed away. One grumpy father and by was he grumpy! 9 hours later, on beach patrol looking for his teeth. we found them washed up. How lucky was that. To add insult to injury my brother had made friends with a lad on the site we were on; in a much later conversation it came out that his Dad made false teeth for a living. So one way or the other Dad would have been okay. That's what happens when you dodge waves.

Hope you are both okay and have a lovely evening