Another visit to Stoke... 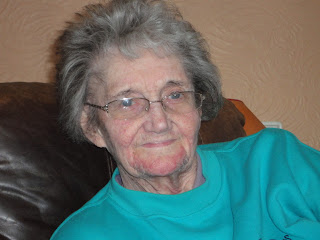 Mainly to spend time with Bebe... 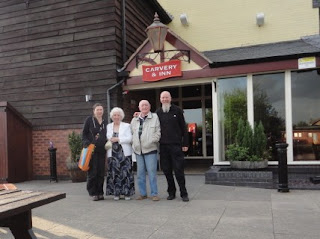 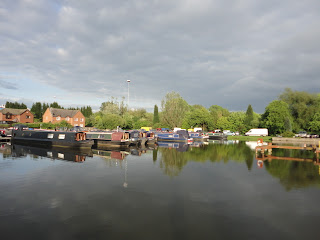 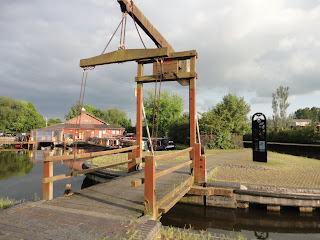 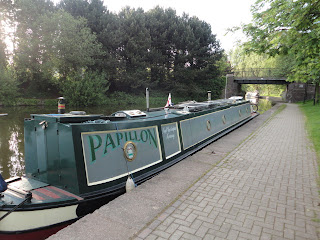 One of our dreams is to live on a barge... 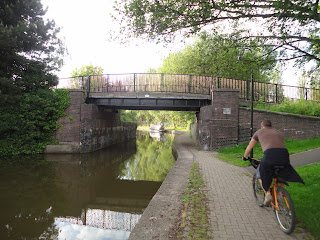 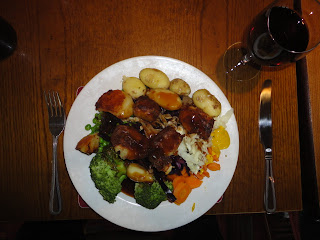 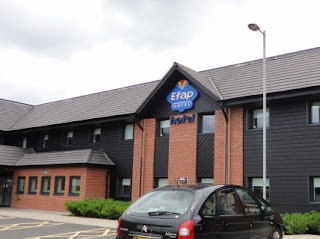 Our hotel, not quite in Stoke - but it's a chain we use in France & Sime really fancied staying there...
It was very nice & only £18 a night! 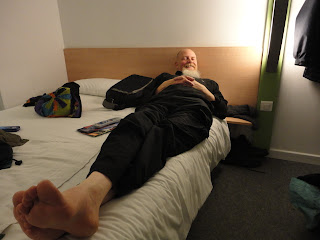 The only time I'd agree that Sime's feet are big...
They're very small really! 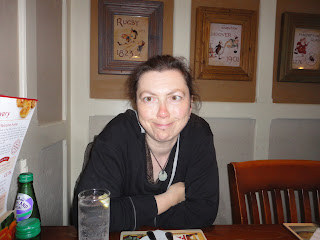 Nobody's ever told me that only one eye goes cross-eyed...
But one of the kids is the same!

This is taken from the mural in the Potteries Shopping Centre.
Jabez is a character from The Evening Sentinel - a  man who speaks in pottery dialect. The man who created Jabez also wrote three books. Sime met him in 1973 & still has the first two books which Wilfred Bloor (the author) signed. The author used the pen name A. Scott, a reference to the north Staffordshire village he came from, which is called Scot Hay.
Sime can also speak & understand pottery dialect, whereas I came from 3 miles over the border in Cheshire - so haven't a clue... Thank goodness for online translators!
Here's a bit more about pottery dialect...
The City of Stoke-on-Trent is comprised of the SIX towns of: Longton, Fenton, Stoke, Hanley, Burslem & Tunstall. Most people think there are only five towns, but this misconception comes from the novel: Anna Of The Five Towns by Arnold Bennett.
On this trip we spent some time in Hanley... 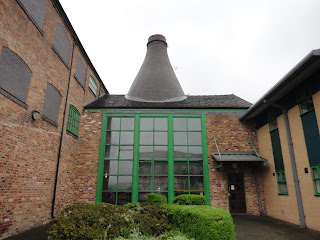 An old bottle oven which now has become a feature inside these offices. 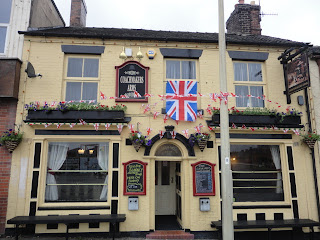 The Coachmakers Arms
We didn't go in, but used to frequent this establishment many moons ago. 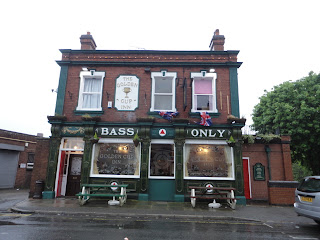 The Golden Cup
Another great old pub which we didn't go in! 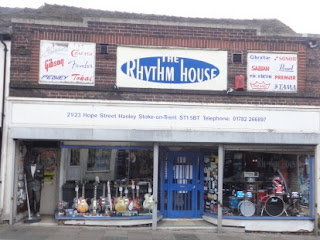 Hope Street is the place to go to buy musical instruments... 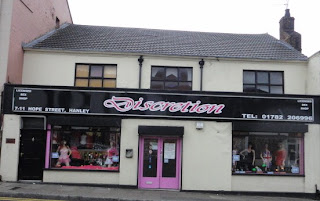 And other things of a discreet nature... Hahaha! 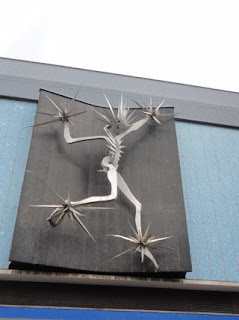 I grew up knowing this guy as Jack Frost. 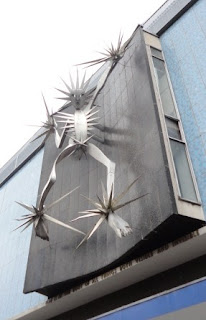 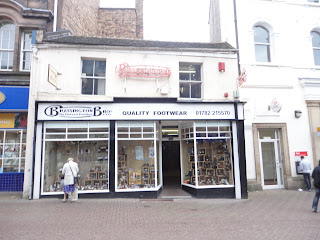 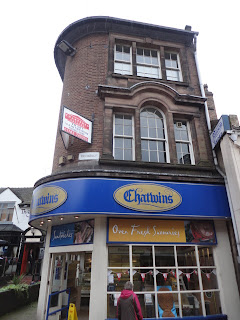 We like this building, but neither of us can remember what it used to be. 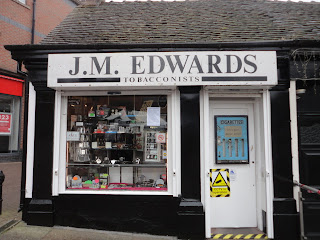 The place to go for exotic tobaccos.
It's always been there... 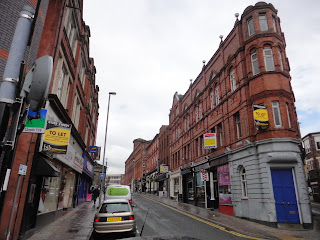 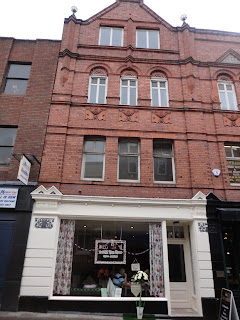 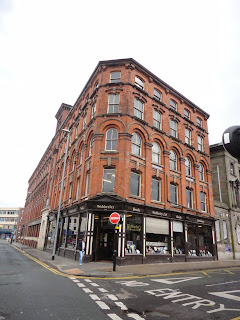 Webberley's a family run, independent book shop which has been trading for 99 years! 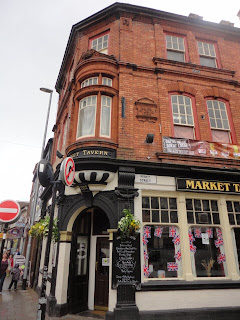 Market Tavern on the corner of Tontine Street. 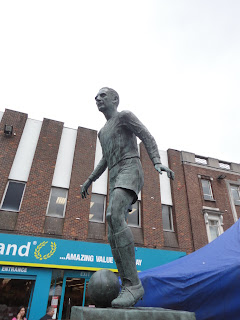 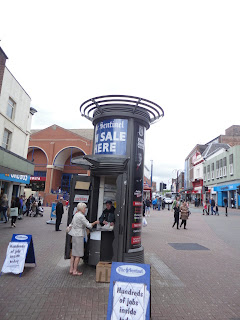 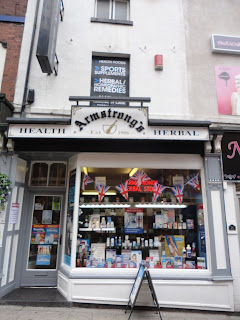 A lovely old herbal & health store which has been going since 1906. 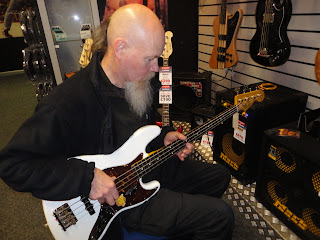 We couldn't leave Hanley without Sime going for a test drive... 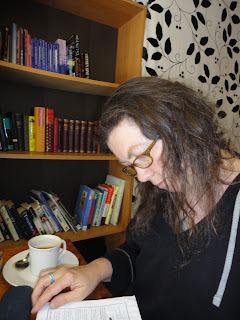 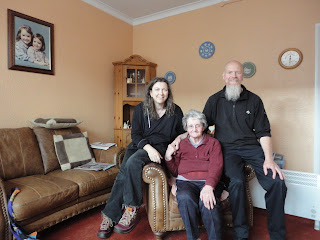 We had a lovely visit, much more relaxed than usual...
And thankfully Bebe's doing ok.
Hope you enjoy our tour as much as we did!
We're off out with Hugo now to Eden followed by the cinema...
Have a good week.
Kay & Sime
xx

MorningAJ said…
Amazing that you remember that sculpture as Jack Frost - given that he's supposed to represent the fires of the Potteries furnaces! I take photos of public sculptures and I'm rather fond of your Jack. The inscription beneath him says:"Fire is at the root of all things visible and invisible".
11 June 2012 at 13:50

Kath said…
great photos, great tour! I love those old curvy buildings. I didn't realise Stoke was so nice.
That metal sculpture reminded me of a book I read, set oop North, where the children were afraid of "Spring heeled Jack".
Your dinner looked gorgeous,I could just eat every scrap now..better go and get some lunch, I'm drooling on the keyboard :-O
Enjoy Eden!
11 June 2012 at 14:39

Just Humans Being said…
Thanks Jane & all from the comfort of your own home!

Just Humans Being said…
Thanks for your comment MorningAJ - The funny thing about Jack Frost is I've always known him by that name & Sime just thought I was daft, but on researching we found that most Stokie folk know him as Jack Frost...
We both agree that we were very scared of him as kids, but at the same time completely fascinated!

Just Humans Being said…
Thanks Kath - since moving away from SOT, we find we see it so differently & can appreciate all the good stuff, instead of just concentrating on all that's not so nice! As you know, we love our veggies... So it's a great meal for us!

Scarlet said…
What lovely old buildings - I usually end up with a crick in my neck when I look at them , but not this time thanks to your fab photos! J has supported Stoke City for over 40 years. He can't remember how he ended up supporting them when he comes from a North West town which has a football team and a legendary footballer to rival Stanley Matthews!
11 June 2012 at 19:32

Rebecca said…
It looks a great place to visit, my maternal grandfather's family is from the area originally. I' been to Eden twice now, but never tire of it x
11 June 2012 at 22:12

Catherine said…
You two are always on an adventure. Going here and going there. I love it!
Wishing both of you a wonderful week!
xo Catherine
12 June 2012 at 03:45

Just Humans Being said…
Thanks Scarlet & now you're driving Sime mad with thinking who that might be...

Just Humans Being said…
Thanks Becky - The nice thing about Eden is they always have something new to see!

Just Humans Being said…
Thanks Catherine - If it was up to me, we'd always be on the road... I think I'm a nomad at heart!

Molly said…
It's always so amazing to me how different dialects can be. There are several in the deep south here that I can barely understand, even though (like pottery) they're speaking English!

Great virtual tour. I really enjoy seeing where you two go and love that Jack Frost sculpture!
13 June 2012 at 02:24

Susan Heather said…
We just love narrowboating but have not been to Stoke. We did one trip on the Llangollen, one starting on the Llangollen and going up to Ellesmere Port and another starting at Brewood and going either side of there. we also did a trip on a river barge on the River Ouse at Earith. Wonderful holidays.
13 June 2012 at 21:56

Just Humans Being said…
Thanks Molly - I remember visiting the Jack Daniels Distillery (surprise surprise)in Tennessee & we really struggled to understand the guy who gave us the tour!