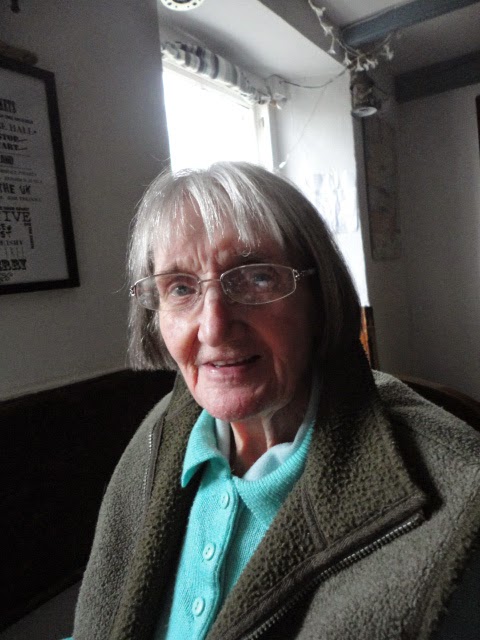 It's a year ago since Bebe moved in with us & although she now tells everyone that we forced her against her will; she chose to come - ok, we had tried to persuade her for years, but it wasn't until she was removed from her home & placed in a psychiatric unit, that she finally accepted that she could no longer cope on her own. We were asked to look into moving her into a care home, but instead - suggested she at last made the move to Cornwall.

For the most part it has been fine, but the occasional blips have increased over the last couple of months & her mood swings have become more extreme. We have had memory service involvement for a few months & the community psychiatric nurse's input has been invaluable. Bebe, as do most people with dementia - thrives on routine, so she has been struggling lately to adjust from attending day care 5 days a week to being home at weekends. The nurse suggested we get a weekend routine in place that would suit us all & to purchase whiteboards so daily information can be displayed.

We decided that eating out wasn't a good idea (even though Bebe always talks about doing it), she only eats well at breakfast - usually 2 bowls of porridge & 2 slices of toast. The rest of the day, she picks at her meals & has a tendency to spit food out (a common dementia trait) - it's pretty gross, but it's what she does... So Saturdays, we venture out either for a walk if the weather's good or to do Bebe's shopping - she likes to buy a magazine & some biscuits. Sundays, we have a day at home - we do Bebe's laundry & she likes to sort it all out & fold it up. She spends most of her time at home emptying her wardrobe, folding her clothes & putting them all in piles. She is agitated while doing it, but feels compelled to do it & we leave her to get on with it.

Bebe's clothes sorting continues through the night - she hardly sleeps, nor does she nap during the day... Incredible!
Although she hates her 'open' wardrobe, we are very happy we didn't replace it with one of her heavy doored ones... As we had to remove her two sets of drawers due to the constant banging of the drawers being opened & closed, so now the only piece of furniture she can move is a chair, which she uses to barricade her shower room door. She uses the main bathroom during the night & puts coat hangers under her pillow, just in case someone breaks in...

We've tried hard to find hobbies for her & have now given up - her life before dementia was just about alcohol (lots of it) & TV, so to get her interested in anything else is impossible. We did bring her CDs & put them on every evening or put on a playlist we've made with her favourite music - sometimes it moves her to tears, makes her sing & dance, but sometimes she doesn't respond at all. All she wants is to be happy, but just can't find it...

The problem we are faced with right now is: Should she be in a care home full time? If so, where? Is it the place she knows best? It's near us, but what if she lives for several years & we leave the area? Would she really be better living in Stoke? With people she has things in common with & a shared history. It's just so difficult, although the thought of going into care is terrifying for Bebe at times - would she really be happier? She would have routine, people the same age, constant warmth & hopefully staff who won't snap occasionally when things get tough...