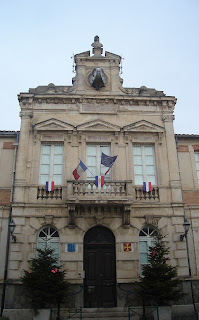 The dinging of the Mairie clock seemed very twee when we arrived, it strikes on the hour, then repeats the same amount a few seconds later - this carries on through the night & is just a stones throw away from us. Then there's the infant school next to the Mairie, hearing the children running around screaming & shouting is just about tolerable, but the fact that they get dropped off by car at 8.45am, picked up again for lunch at 12pm, dropped off again at 2pm & picked up again at 5pm & this is all happening just outside the house.

The Mairie also has a tannoy system, which we woke to this morning with "Ding-dong, 'allo, 'allo" & then the guy went on to announce some sort of social event going on in the village. Shortly after, 2 road workers arrived outside the house & started to scrape & sweep the gutter. One of them insisted on singing as loud as he could, but was unfortunately tone deaf - so sounded more like he was crying out in pain!

It has become obvious to us, that although we'll probably soon adjust to village life - we are not really cut out for it. We much prefer to be somewhere remote, I had just thought it would make a change! On top of all this, we also have noise from the main road, which is a cock's stride away & air traffic from Carcassonne airport! Had we still lived back in the northern town , before our move to Cornwall - we would have thought this village was peaceful!

Saying all this, the biggest problem is that the area seems to be full of Brits! The kind of British people that we have absolutely nothing in common with... The kind that make the rest of the world hate us, they move to warmer climes, but still want to surround themselves with Great British grub, British TV and worst of all, refuse to integrate. We didn't expect there to be so many Brits in this area. Perhaps The northern Auvergne will be where we will settle after all?

So it was time to get out & about, Carcassonne was calling... At last somewhere that impresses! We've wanted to see Carcassonne for sometime, well actually Hugo's the one that really wanted to visit after reading:        Labyrinth

3 years ago. He said it wasn't a brilliant book, but he loved the description of Carcassonne & at last he's been & it lived up to expectations!

So a happy Fam 3 - a beautiful day in a wonderful place... 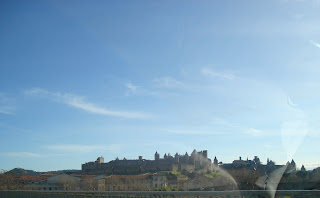 Our first glimpse of the mediaeval city 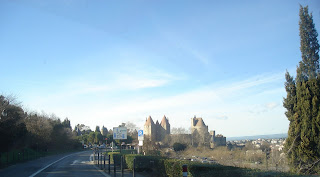 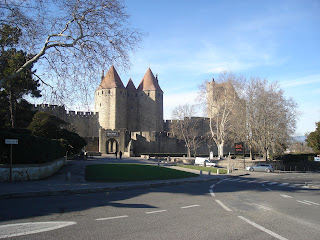 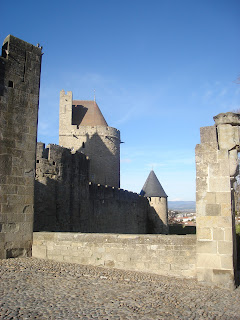 Finally in the grounds 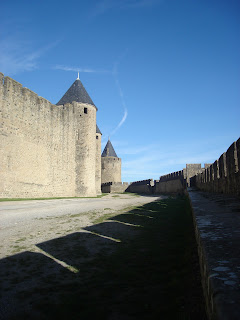 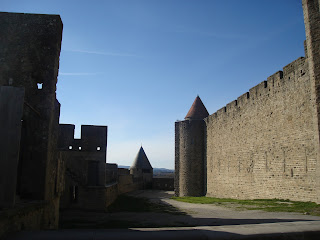 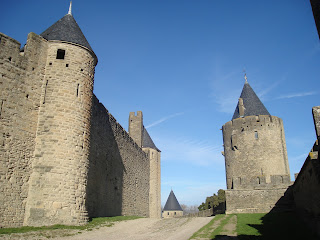 The city & ramparts were built between 11th & 13th centuries 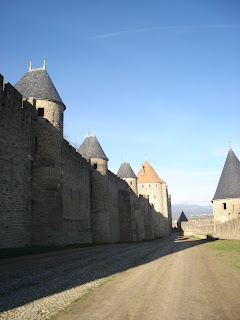 The area between the inner & outer walls was used for jousting 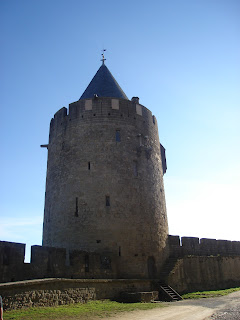 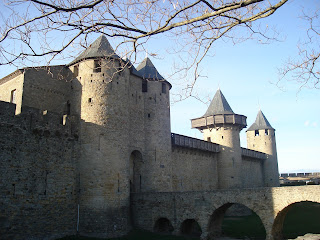 The chateau which we're going to visit another day 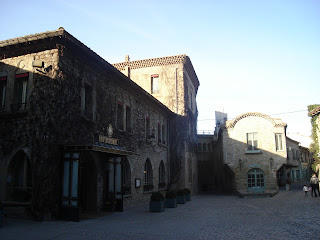 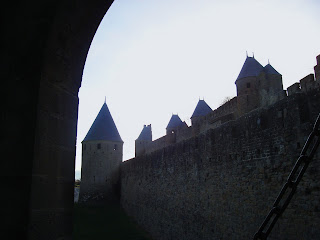 Leaving the city via the drawbridge
It's an amazing place, that we intend to visit a few times during our stay - we are very lucky to be here at a quiet time of the year, so the city was quite deserted.
While there today, we did go into the haunted house (La Maison Hantee), which actually gave us lots of frights & was laugh out loud funny.

We were the only visitors in there & were told that we would be going through a maze of rooms, corridors & stairs. The doors were all automatic & just gave us 10 seconds to get through them. So if any of us didn't get through - we would have to remain in that room for another 6 minutes. Luckily, we made it through each one just in time, although Hugo nearly got trapped at a point when we were being chased... Yes, there were actors in there who totally freaked us out, as we really didn't know what to expect! It was still the highlight of the day & we must have given them such a laugh as we were screaming & holding on to each other as though it was real!!!
Tomorrow, we hope to get into the mountains - there's a fantastic winding road on the map, so we'll pack a picnic in the morning & explore some more...
Kay, Sime & Hugo xxx

just Gai said…
Just as I was thinking what an idyllic retreat you had stumbled upon you have put me off with tales of tannoys and aeroplanes and British expats! Still Carcassonne appears to be living up to expectations.
19 January 2011 at 00:03