January 29, 2011
Looking forward to a day out tomorrow. It was raining so heavily today, we decided to stay in.
Not sure which place to visit. It's either Barcelona, taking in the Dali theatre/museum at Figueres or the Roman aqueduct at Pont du Gard. I've been wanting to visit the aqueduct for some time, but am thinking that it could be another disappointment like the Milau bridge was. In this case, I'm sure that the structure itself will impress, but it's the touristy tatt that comes with it. I think you have to pay to "Get In". What's that all about? "Get In ?" Get in to what? Through a turnstile - a few explanatory placards, toilet block and a Unesco approved audio guide. You can find this everywhere. Anyone been to Land's End in Cornwall? What a joke that is. The organisation that owns Land's End also owns John O'Groats in Scotland. It's only a matter of time before they own Westward Ho! (The only British place name complete with an exclamation mark!) and Mount Snowdon. Land's end pre pay-to-enter was a pleasant enough destination. Windswept coast and finger post. You know the famous finger post don't you? Everyone's had their photo taken there. New York -3147 miles, John O Groats 874 miles, Uttoxeter 316.9 miles . It doesn't say Uttoxeter, but it should because Shane Meadows is from there. We went years ago and after the "Attraction" had closed for the day (Land's End, not Uttoxeter. As far as I'm aware it's free to enter Uttoxeter) it was possible to walk straight in and have a chuckle at the ineptitude of the place, the half-assed attempts at professionalism, the laughable cheapness of it all. Never mind, there's always the Finger Post. Where is it? Kay, where's the post? Then you find out that they take down the post at the end of the day and LOCK IT UP. Yes, lock it away in a shed to stop people taking photos of it. There's a charge to have your photo taken by it now. Jesus H.Christ.
Is this what awaits at Pont de Gard? It will probably be closed. That's what it's like in France. You do the internet research, make a packed lunch, drive 200 miles and find it's closed because Jean-Luc has salmonella,  Gererd Pasteur is sleeping off a hangover and Pierre Halliday is with his student camerades protesting about the baguette price hike. France has a nationwide convenience store called 8 a Huit. Great, open 8 until 8. No, they close for lunch or whenever. I'm not a huge national Trust/ Heritage fan, but when they say they're open at 9am and close at 5pm, they really are. 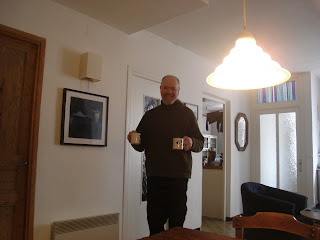 just Gai said…
We've visited Land's End on several occasions and what a blot on the landscape it is. It beats me how they were given permission to build it. There's a great walk to be had from there to Sennen Cove though.
30 January 2011 at 17:28