on March 06, 2011
We're going to be heading back up North again on Thursday, this time just overnight for my Uncle's funeral.
As well as being a sad time - It's also going to be difficult to see my Mum again. We severed ties nearly three years ago now (though saw her briefly at Nan's funeral 18 months ago).

It's a shame our relationship turned so sour, but her behaviour became intolerable & we felt the need to protect the kids from the grandmother they'd adored for years, who was hurting  us all emotionally. She has ignored my suggestions of making amends & to be honest, our lives have improved so much since she walked away...

I don't hate her for the hurt she caused & I understand that we are completely different in every way. I wish her a long & happy life, but I hope that we never have to see her again after this week.

It's funny, but over the last couple of days - I've come across several bits of interesting information about relationships... Starting with Pattypan's Blog, which led to our own discussions about how people come into (& sometimes out again) of our lives.
Yesterday, I heard something on the radio about people who are 'open' have better relationships & find it easier to make friends - this has been on our minds since visiting Stoke, as we are very aware how 'open' the folks are up there & how easy it is to strike up conversations & learn life stories from complete strangers! People have also said the same about us... Have we always been this way? I'm not sure.

We have had friendships that have come & gone, some dwindled, some ended really nastily & some that are still going strong. Sometimes we try to analyse why this happens & we're still none the wiser! For many years, we had friends who always seemed disappointed with us or annoyed with us, we've even had so-called friends who have tried to come between us. In the past we have attracted some quite nutty people into our lives, but not any more. Luckily, we were able to get through those crappy times & fortunately, have come out the other side - stronger than ever. We no longer have friends who sap our energy, make us feel crap, criticise our way of life & instead we are surrounded by genuine, warm & supportive people who accept us for who we are. Does being 'open' create problems for us or were we just in a bad place at the time?

Today, I picked up my Dalai Lama book & just found randomly some words about intimacy, thoughts that both he & Desmond Morris agree on... People who live without intimacy (touch, sharing of fear & joy) in their lives feel that they are failing, will often resort to props like addiction & are more likely to become ill. They can also become consumed with loneliness. I don't know what it's like to feel lonely, though I did once spend a week at my Nan's flat in Cheshire while she was in hospital & that was really weird being without Sime & the kids, I hated being so far away & missed them all terribly.

I was 20 when we got together, so had never had any fear of spending life on my own - in fact, we met just days after I'd moved into my own flat. I had a good job with plenty of money, a great social life & then along came Sime! We had met 15 years before at my Grandparents caravan in Wales, my Granddad worked with Sime's Dad & they came to spend the day with us. I was 5 & Sime was 11. I remember feeling very flustered with him, but we spent hours playing. I had often thought after then that we would meet again in the future. When the day came & I knew he would be at a family get-together, I remember lying in my lovely old bath - thinking that my life was about to be turned upside down & I was right!

We were talking this morning about whether our paths would have still crossed, even if the family do hadn't happened & thought that we would have probably met some years later at Granddad's funeral... A psychic woman we met a few years ago, told us that we'd been together in previous lives for as far back as she could see. She said that we planned our birthplaces, so we would at some point find each other & that our physical appearances have been pretty much the same. A sort of mediaeval look about us - both of us scruffy, me with tangled hair & Sime with a beard!

In Buddhism, it is thought that feelings of attachment are not good, instead it is healthier to cherish, be cherished & feel compassion. I think my near death experience with my thyroid gave us the jolt we probably needed to get our priorities right - to enjoy every minute of our lives, to become selfless, generous & sharing. 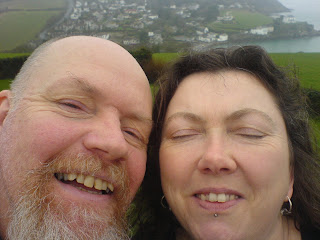 I think being positive & loving life as much as we do today, means that we attract good people & it's an absolute joy to have so many beautiful folks around us!
Kay :)
Family friends

Karin said…
I hope it all goes well on Thursday.

Sorry to hear about the problems you have with your mum, Kay. It's difficult when parents are negative, but sometimes in their own mind it is a sign of affection because they want what they think is best for you.

Unfortunately some people have very set ideas about what is best for other people and think everyone should conform to their ideas. They can also feel very hurt when others don't conform, and perhaps they are also afraid because their own world view seems under threat.

If this is the case, perhaps you or a mutual friend can find a way of helping your mum see what is really best for you. Sometimes it takes a special person to be able to help someone like that to understand just how damaging their 'loving' behaviour 'for their best' can be.
6 March 2011 at 20:24

Anonymous said…
I haven't had anything to do with my mother for almost 23 years. It was difficult to finally realize that she couldn't be a part of my life anymore, but that is the way it has to be.
I will be thinking of you this week.
7 March 2011 at 01:48

Just Humans Being said…
One thing I am grateful for - is I learnt from 'The Waltons' & my Grandparents how to be a parent!

My Sister & I loved being with our Grandparents as children & I feel very lucky to have had such great people in my life.

My Mum & I have shared close times, but there has also been some hurtful times too. When she chose to say such terrible things involving the kids - our relationship had to end. In one night, she managed to break the hearts of Rose, Sime & Nan - I find it hard to forgive my Mum for that.

We have moved on & it took a while to do so. There will be no reconciliation - we no longer have room in our lives for such conflict. I am so much happier, she's not around to let us down, disappoint or upset & once this week is over, I won't have to think about her again.
7 March 2011 at 13:07