Are We Really So Strange? 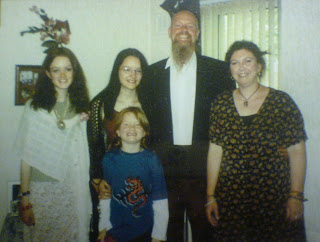 The Smiths in 2004
After reading Mel's Blog a few days ago about her Son being punished - I was reminded about a recent conversation I had with a friend, who told me that because our kids have never really rebelled or fought with us or each other - that they will struggle to maintain relationships in later life. Basically, we have ruined their lives because we all get on... I actually worried about that for some time & then thought about my own childhood - my siblings & I fought a lot, I went through periods of hating both parents & I still struggle to maintain difficult relationships, so I think whoever came up with that idea - needs to think again!

It seems that it's quite common these days in the UK for kids to be grounded for mistakes they've made, though when I was young - it was something we just heard about in American films or TV series. We have friends who regularly have to ground or deny their kids various privileges to get them to co-operate, so I don't know why ours have never played up. Maybe they have, but we just haven't noticed or don't see it as a big deal. Sal was a door slammer in her early teens if things didn't go her way, but she grew out of it - once she realised it didn't bother us. Rose tried getting stroppy a couple of times, but it just made us laugh & Hugo sometimes gets out of bed on the wrong side, but he's usually back to normal with a bit of grub inside him!

There was a major incident with Sal, when she went to primary school - she told a boy in her class to f*** off, she was 10 & the boy was intentionally winding her up. At the time, she was a bit of a teacher's pet & this teacher was totally shocked, to the point that her relationship with Sal cooled immensely! She was also really off with us too & so were many of the Mums - lots of them never spoke to us again. It was like they all thought we sat at home teaching the kids to swear... And although Sime did (& does) swear like a trooper (Am I allowed to use that phrase these days?), he never swore in front of the kids - only myself & probably his fellow band members are blessed with that honour! If my memory serves me right - Sal had picked up that particular swear word from the boy she shouted at! I think that it was expected that she would be punished by us, for using such foul language - but of course, being the responsible parents that we are - we just thought it was fantastic. The boy was vile & so was his Mum, so she did something that we could never do... Obviously, we played it down at the time & we talked about perhaps school wasn't a good place to say such things, but no doubt she knew how we really felt. It was so funny to see the Mums in the playground clam up & walk away from us, but they finally had their excuse to avoid the 'long haired hippies' & that suited us just fine! Other parents would have dealt with the incident very differently, in fact at the same age - I asked my Dad what the F word meant. He never explained, but grabbed me, frog marched me to my bedroom, threw me in there, slammed the door, shouted that I wouldn't be having any dinner & said I wasn't to come out until the next morning. I didn't have a clue what was going on, but guessed that that word was probably very rude!
I'm sure that if Sime was asked about his proudest Sal moment, it wouldn't be seeing her get her degree from uni last year - it would be the moment she asserted herself in that little village school!

I think the kids would ground us on occasion... Well, we get reprimanded quite a lot! I remember Sal telling me that she wished I'd brush my hair before taking her to school. "All the other Mums brush their hair & wear make-up!" It did make me laugh, but she was truly embarrassed - so I tried to make more of an effort. Though I still forget even now to brush my hair before venturing out... Rose is very laid back, so has never really been annoyed with us - although she does sometimes have to tell Sime to quieten down late at night! She & Hugo also seem to cringe at Sime & my conversations on Facebook & Hugo has been known to say things like: "There's no way I'm going out with you - if you're wearing that..." Mainly to Sime, I hasten to add!

So perhaps the way we are has forced a role reversal with our kids? I really don't know. We have friends who say they tried being more like us with their kids, but they struggled to keep it up - what do they mean? I've said it before, but I really don't know what we do differently. I think it was Sal's boyfriend, Ryan - who said that we treat the kids more like mates. Maybe we do. We have always included the kids in everything we've done. Always listened to what they've had to say & never said that they are wrong, but suggested alternatives if they hadn't thought of any themselves. Some people think we've allowed them to 'rule the roost',  but we don't think so. We're all equal in our house, we don't force them to do anything they don't want to do. But they are expected to clean up after themselves. Sal was very good at that, but Rose & Hugo are not... Rose especially! She & Asa are more like lodgers really, they live fairly independently - do their own shopping, cooking & washing. Asa has been well trained & always clears the kitchen, but Rose will happily leave washing up for days... Sometimes it seems that she's disinterested in household tasks, but that's the way she is - it's not malicious, there's no need for us to shout, besides - that won't resolve anything! She's our Daughter & we trust her - she'll get there eventually!

We've never read a book about raising kids, we've never felt the need to follow other families' ideas. We don't give pocket money, the kids save birthday money if they want something big. They are content & happy with what they've got. 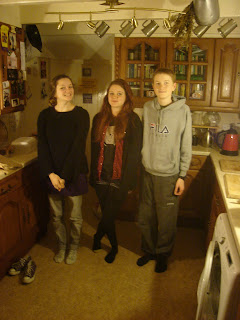 If  any of us needs help, we are always there to muck in. We pull together when we have to, we're supportive & respect each other's opinions. We laugh & cry together at times, but most of all - we enjoy each other's company! 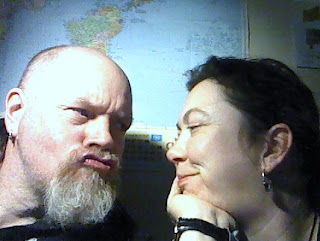 We may be an unusual family, but we don't care!
We know that the way we do things is right for us & as long as we're all happy, then that's the main thing!
Kay :)

Anonymous said…
Kay,
You are so right. Don't react to the behavior. I know my son is testing his boundaries, but enough already!!
I love the primary school story - sounds like something I would have done.
13 March 2011 at 04:09