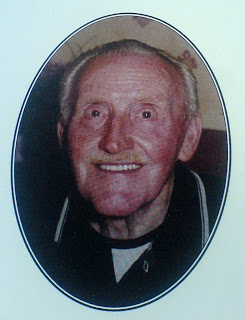 The place was packed with probably many characters from Stoke's underworld!
We can't be sure, but we've always believed that Bill was probably the Tony Soprano of the town he lived in...
He had a bit of a secret life, that he never shared with the family & there were certainly lots of guys in big black overcoats there today, though I didn't see any shades - so perhaps I'm wrong!
Our idea of arriving slightly late & just sitting at the back - didn't work out in the end, as my Mum & Husband turned up at the same time as us, the funeral had been delayed & so we were ushered along with my Brother & Mum to follow Bill's coffin & then into the family seats at the front!
There was no change in my Mum's behaviour towards us, no joy in seeing her only Grandson - didn't even look at Hugo, let alone speak to him. How can a Grandmother be that way? Especially as up until she remarried - she doted on the kids, it's just so bizarre & although we chatted about it a lot with Hugo on the way home & he seems fine - it must still hurt... I know it hurts me!
So glad we went though & it was nice to see my Brother - who we don't see very often & of course, other  relatives, who we only ever see at these occasions!
Bill wanted his funeral to be a celebration, no sadness or tears & I'm pleased to say that I managed to remain calm & dry eyed. Unlike my Mum, who sobbed throughout for the Uncle she didn't really bother with - perhaps she was feeling guilty, or maybe it was tears of happiness because of all she's inherited?
The odd little Reverend conducting the service (who was more like a Shakespearian actor, than a man of God), said that we should think about the things we are grateful for in our lives & for me that's Sime & the kids - this great close knit family that I'm a part of. There will never be weirdness between us, no favouritism, no neglect - just lots of love & good times.
As soon as the funeral was over - we were back in the car for our 300 mile journey South again... 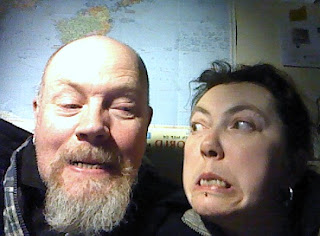 Here we are again...
Happy as can be,
All good friends & jolly good company!
Night, night.
Kay :)

Anonymous said…
I am glad the funeral wasn't too stressful. I am really sorry about your mom. Good to hear that you are all home safe and sound.
12 March 2011 at 03:58

Karin said…
I'm glad the funeral went as well as could be expected. Sounds like maybe your mum's new husband could be exerting an undue influence over her, but it is often hard to fathom the workings of the human heart and mind. Good that your own family is such a strong unit.
12 March 2011 at 15:12

Glad that things that went off as well as they could. Although it strikes me your uncle bill was arranging the order he wanted rather than you sneaking into the back. Similar thing happened at my Nan's funeral my Nan had always stipulated that she wanted us to follow the hearse. Family senior members decided not too. We got held up in traffic and ended up following my Nan's hearse so that she got her way exactly. Am sorry for the situation with your mum . All I can say that sometimes adults like small children back themselves into situations and corner themselves knowing full well they are in the wrong but pride dictates they don't admit anything usually because it is a lesson well outside their learning sphere. That action ends up causing unnecessary friction and there are no winners only losers all round which is a pity. Time will tell.

Just take care - I take it you will start to get really busy from hereon in,but will catch up with you where I can.

Just Humans Being said…
Thank you for all your kind words.

Karin & Pattypan - I think you're both spot on regarding my Mum!